Your go-to destination for eBooks, podcasts, whitepapers,
webinars and more to help elevate your business

Recorded live from the Mercatus booth at Groceryshop 2019 in Las Vegas, Sylvain and Mark riff on the opening scene and the key themes at the show.

Sylvain Perrier:              … the data in grocery. If you could reverse compile it on a household basis, you’ll know the age, the amount of children, what they’re into, so then you can start enticing them to buy or to rent or to do things with the other products that you carry. Why wouldn’t you sell other items on your website that you won’t-

Sylvain Perrier:              100%. Why wouldn’t you present them with the things that they need? Ladies and gentlemen, welcome to Digital Grocer, Mercatus’ very own podcast. We’re in the middle of the trade show floor at Grocery Shop 2019.

Sylvain Perrier:              I saw someone generate static electricity about 20 minutes ago. They burst into flames. That’s how electric it is in here.

Sylvain Perrier:              It’s kind of interesting, you know, when you come through the floor versus some of the other events that we’ve attended, you know, especially Grocery Shop last year-

Sylvain Perrier:              … the degree of maturity, I think an understanding of where the space is going is really shifting. There seems to be, I mean this is my impression, I’ve only gone to a few of the sessions since kind of showing up is there’s kind of knowledge right now where I think the industry is ready for not what’s new, but what’s better.

Sylvain Perrier:              In the sense that they all capitulated years ago and decided to go one route and I think now they’ve kind of woken up and become more wise in the sense of what they want to kind of tackle. Are you getting that sense as well?

Mark Fairhurst:             Yeah, I definitely … Don’t get this wrong. I mean, there’s a lot of startups, a lot of technology companies that are in the perimeter of this space.

Mark Fairhurst:             Even on the show floor. But you’re right, they understand what works. They just want to know how to make it work better.

Sylvain Perrier:              Absolutely. But you know, we’re also seeing some of the retailers we work with and some of the ones that, you know, we’re talking to are generating north of 150 to $160 million in revenue on an annual basis from an e-commerce perspective and I think they have sights on growing that business.

Sylvain Perrier:              So they’re looking not just for the new cutting edge solutions that give them that kind of that next, you know, cachet with their consumers, but things that are going to help them drive efficiency-

Sylvain Perrier:              Proven solutions and solutions that are, you know, ultimately, at the end of the day that are going to stand the test of time. We’re seeing some of that on the floor. You know, we’re surrounded here by some of our partners. You know, Flip is across from us.

Mark Fairhurst:             Marketplaces. We tried to get that recorded this morning. A little technical issue.

Sylvain Perrier:              You know, I’m excited to talk about marketplaces because there’s this notion at the end of the day, and I think you and I talked a bit, there’s certainly, I haven’t shared this with our audience, is it’s the reverse Amazon model.

Sylvain Perrier:              Sure, I will. So if you think of it this way, in the United States, when you look at retail, we talk about in terms of household penetration rate. What does that mean? So that really means is how often do households actually go into this specific retail vertical? And in terms of grocery, it has a degree of penetration of, I believe, higher than 98%, which means on any given time people are actually going into a grocery store, right? And, guess what? That’s common sense. People have to eat. You can’t always go out to a restaurant, and so on.

Sylvain Perrier:              Amazon, depending on their vertical, what I mean by that is their products, right? It could be sporting goods, it could be something else. Now, sporting goods is a great example. You know, theoretically in Canada, right, because we have winter and then we have summer, those are typically visited twice a year, that specific vertical, right? So you think hockey equipment in the winter time and then you think of the summer stuff, right?

Sylvain Perrier:              Baseball, soccer. So it’s a two time hit, quite frankly, right? So, if you’re Amazon, and that’s a repeatable model in the other verticals, whether it’s books, so on and so on, what do you do to increase that household penetration rate? Well, you start selling groceries.

Sylvain Perrier:              You buy Whole Foods and so then you start leveraging the data. I know you and I have talked about the sense that this, the data in grocery, if you could reverse compile it on a household basis, you’ll know the age, the amount of children, what they’re into. So then you can start enticing them to buy or to rent or to do things with the other products that you carry. Okay.

Mark Fairhurst:             And it’s just not grocery product. It would be pharmaceutical.

Sylvain Perrier:              PillPack, which I think the deal that they have with Berkshire Hathaway and Chase, there’s something that’s going to emerge out of that.

Sylvain Perrier:              Okay. So now you understand household penetration rate, why potentially Amazon is entered into grocery and the acquisition of Whole Foods, right? So let’s assume it’s a data play and the ability to sell more products. So if a grocer today, online, is doing three to five to 8% of gross revenue in their e-commerce realm, which is typically their best customer migrates to online, and their buying household penetration rate, 98% probably one to two times a week. I think online, I can’t remember our statistic, but I think it’s one every two weeks.

Sylvain Perrier:              And it’s a large, it’s a significantly large basket than what we see typically in store. Why wouldn’t you sell other items on your website that you’ve got?

Sylvain Perrier:              Right? Walkers, canes, kind of those things. Or if it’s a young family that just had a baby, why wouldn’t you present them with the things that they need?

Sylvain Perrier:              Furniture, strollers, bassinets, those things. And there’s technology out here. There’s some on the floor here that operate these marketplaces that can easily be bolted on. And I think that’s ultimately, if retailers … Our theme here at the show, Mark, is Back In Charge.

Mark Fairhurst:             We’re helping grocers get back in charge of their digital commerce future.

Sylvain Perrier:              100%. So if that is the case, and if you’re a retailer that has seen past the curve of the earth, not many people do, but if you understand that it’s more than just about food, that it’s you’re very consumer-focused and customer-centric and you have the ability because you see so many of these consumers on a weekly basis, why wouldn’t you want to sell them other things? It’s just common sense.

Mark Fairhurst:             You understand their household structure. Assuming you are a digitally mature grocer and you have invested in that capability.

Sylvain Perrier:              There are fees for running your e-commerce platform. And we’ve proven through our own ROI models, contrary to some of the other solutions that are out there in the market, this is a profitable venture for a retailer. So if you could sell other items that are generating, call it 15 to 65 points and you take a percentage of that, not only are you contributing back to your bottom line, but you’re offsetting your cost and running actually an e-commerce program.

Sylvain Perrier:              But even more so, think of the richness of the data that you’re collecting in that sense. And now not only you’re thinking in terms of a consumer in terms of lifetime value, but if you could journey map the life of an average shopper, and you can with the historical data they have, if you could anticipate when they’re going to need something, that’s massive. And I think that falls short for a lot of grocery retailers out there that, you know, think of their data as a blip in time to be able to sell one or two items as opposed to anticipating down the road what they may need. And that’s why I’m so excited about our Aisle One stuff. There we’re unveiling kind of the second phase of it connected to our platform today.

Mark Fairhurst:             We’ve invested heavily in artificial intelligence, I think, given the capability and the flexibility of the platform.

Sylvain Perrier:              It’s challenging in the sense that, you know, most people think when you get into the AI space, it’s the complexity of the volume of the data or the core or the gaps in the data, whether it’s CRM data, whether it’s transactional data, whether it’s usability data that is available with respect to the digital channels. But I think at the end of the day is for us what the realization came is what questions do we want to ask? How do we want them answered? Is it an efficient way of doing AI, quite frankly? And I think that was the big hurdle that we had to face. So I’m kind of excited in terms of where we’re heading with it because I think what we’re ultimately, what we’re going to find out is to continue making and driving that technology forward that it becomes beneficial for the retailer you have to coach the retailer to say, “Well these are the questions that you should be asking.” And not just about adding one or two products to the basket, but really making it customer centric so that experience online is that much richer.

Mark Fairhurst:             And then for us it’s basically preaching to the converted because this is the vision we’ve had all along.

Sylvain Perrier:              It’s exciting and I’m happy to be here and I got to thank our friends over at Mouth Media for being with us here and running our podcasts, so it’s kind of exciting. Mark, what can we expect from the Mercatus team over the next few days?

Mark Fairhurst:             Well, speaking of podcasts, so we have more interviews to take place from the show floor. We have great retailer conversations that we will be engaged with and we’re looking forward to new product and retailer announcements following the show.

Sylvain Perrier:              … and then looking forward to be able to announce it to the broader industry.

Sylvain Perrier:              Ladies and gentlemen, thank you for tuning in. Stay connected to make sure to download our next episode that we’re going to be recording right here. It’s going to be crazy and, Mark, how do people get ahold of us? 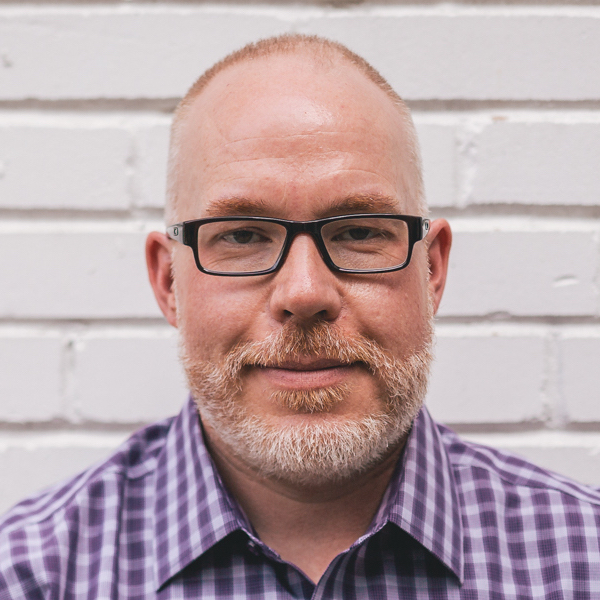 Sylvain is president and CEO of Mercatus Technologies, and the driving force behind the leading digital commerce platform in grocery retail today.

As Senior Director of Marketing at Mercatus, Mark is responsible for leading the overall market strategy development, planning and execution to support Mercatus' multi-year revenue growth and customer acquisition and retention objectives.